It’s that time of the year and for me, its time to do playoff data analysis again

I have been doing this analysis to see if a simpler version of my metric called “Scoring Impact” works the same as the PER developed by NBA. 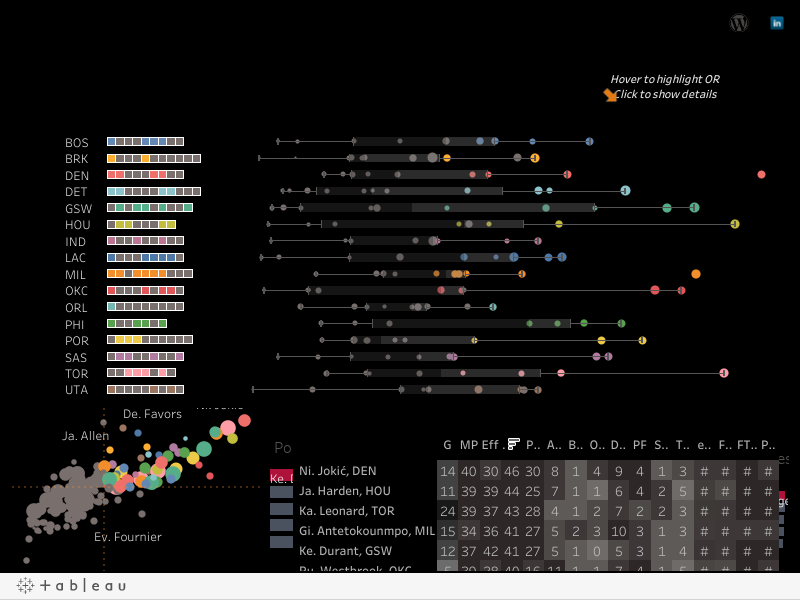 From the looks of it, my model is way easier to explain and actually shows a co-relation to the PER. Enjoy the analysis here and let’s go…. Bucks?

Last year, I posted an Infographic made in Tableau that showed how the players did in the regular season of NBA.

Some of the metrics in that post used my own way to calculating what an NBA MVP should be. And Russell Westbrook, stood out on the top right.

This year, some folks asked me how my infographic would look like with 2017-18 regular season. So, here you go

So, you wondering how your favorite player is doing this post-season.

Get your data thirst quenched with this dashboard.

Click on the link to launch the Tableau Viz (updated daily)

So, just like a lot of you, I was interested in looking at the data for the basketball players this NBA season.

So, I have been wondering if the values that the modern day athletes have changed much over the course of time.

I was deeply saddened by Ryan Lochte’s exaggeration of the incident in Rio and now, I read that Ms Biles was taking banned substances (with approval). Now, the two situations aren’t the same or even similar, I get that.

When some of the athletes’ medical reports were hacked and leaked (this week), it has come to our notice that Ms. Biles had been taken Ritalin and she has been taking this since she was a kid to help with her ADHD. I am glad that she came out and said there is no shame in taking medicine for ADHD and wants to kill the stigma’s associated with certain conditions.

However, I wonder, if I am wrong in expecting that such information be disclosed to general public in a more proactive manner.

I also understand that she has done everything by the rules, they have asked for a medical exception and IOC has mentioned that all was done as per the rules and she did nothing wrong.

But, I must say, when events transpire, like the recent hack, and athletes then try to explain their side of the story, it looks more like damage control.

Again, I am not accusing her of doing anything wrong and I admire her standing up to the situation. Just saying, it would be good for such info to be disclosed and available as public knowledge prior to the incident.